On Sunday 26th August a couple's reported sighting of a large cat like creature in the fields surrounding St Ostyth near Clacton-on-Sea, Essex provoked a massive police response. Search teams including two helicopters with thermal imaging equipment scoured the countryside followed by a media circus.  A spokesperson stressed, the incident was not being treated as a hoax. Mr and Mrs Atkin who spotted the creature said "Whatever it was, it's definitely still out there."

Assisted by Mr Richard Brown, I embarked on a safari to seek out the resonance of this creature in the Essex landscape. We drove up to the area the day after the media circus; the search had been called off but the police still considered it a serious enquiry. There was barely any evidence of the previous day's events except a residual and palpable tension projected onto the terrain.

When we finally returned home, I found Richard Sawdon Smith (winner of the John Kobal Awards 1997) standing in my kitchen. We spoke about the presence of absence in landscape.

This project explores the experience of reality affected by circumstance, these landscapes were the same before the media reports of an escaped wild animal, they are imbued with the fear of the observer. it is an observation of the impossibility of reflecting reality and truth when we are consciously and unconsciously influenced. These ordinary landscapes were for a short period of time transformed into a dangerous Jungian jungle, observed through the filter of our most primal instincts of fight and flight.

Transposed into the gallery environment, away from the zone of perceived danger, the images become a record of the influences affecting an observer. This series is a further discussion on the nature of Pareidolia as it applies to how we view art as audience; the dichotomy between what is there and what we perceive to be there as unique and should not be assumed to be shared.

I went into the National Gallery in search of an unrelated reference for another project and came across Henri Rousseau's 'Surprised!' 1891 in Gallery 45. Whilst Rousseau gained knowledge of the jungle serving as a regimental bandsman in Mexico in the 1860s, this painting is thought to be inspired by visits to the Paris botanical gardens.

Posted by Richard Ansett at 13:16 No comments:

Documentary and the Pot Noodle

The Ian Parry Scholarship is a memorial to potential denied.  A young photojournalist struck down at the beginning of his career and the feelings that must still engender in his friends and family is the catalyst for this prize. It feels like a genuine attempt to nurture and encourage a new generation of student photographers working in documentary by offering the opportunity to be involved in an exhibition, award and commission.

The 2012 show is now installed in the reception of a trendy advertising agency.  I am unsure whether a temple to the pursuit of selling Pot Noodle is quite the appropriate venue for a serious exhibition of documentary photography and the exhibition certainly lends the agency Mother more credibility than it returns. I cannot rationalise why they moved out of Getty Images Gallery.
There is a party atmosphere and as I walk around I have to remind myself of the age of the finalists selected, youth is all about unfulfilled potential and here there are seeds of a future generation of photojournalists.

Curator Rebecca McClelland, introduced me to the winner Adrian Fussell, 22.

Fussell comes from a family steeped in American military tradition but he is the first in the family line not to serve. He is cautious about sharing his opinions too openly on the military, out of respect for his family members who are veterans of recent conflicts but he shares some of his views and there are hints at a personal perspective in his images, perhaps more so in the line of portraits of teenagers with guns on his website. We talk about the power of the editing process and what he left out.

We are all trying to make sense of the world and our place in it and these early attempts are visible in this exhibition; photography gives us an excuse to explore other lives from the perspective of our own.
I admit, I am not the biggest fan of 'traditional' documentary practice; I feel it masks the prejudices of the photographer and presents images in a form that the genre forces us to accept as truth. But Fussell and the others affirmed by the selection in this show are starting to learn that their images can affect people and the photographer can stitch an agenda into their work. There is a moral question to be addressed at some point between ambition to succeed and our personal values.

Robert Capa's famous images in Spain now seriously undermined, said "The truth is the best picture, the best propaganda." In lieu of revelations of Capa's whereabouts during the civil war, this quote can be read as an accidental betrayal of his true motivations. In the creation of a great image, the truth can be subjugated. See Thomas Hoepker's image of Brooklyn New York, September 11, 2001.

It is hard for Fussell to comprehend what makes his series worthy of the prize and i agree that all the projects have equal value. Fussell's commitment to the telling of the story is on show and I think this gave him the edge. There is a unique perspective that can only be gained by the winning. Its an early and complicated lesson offered to very few and an incredible opportunity to grow. 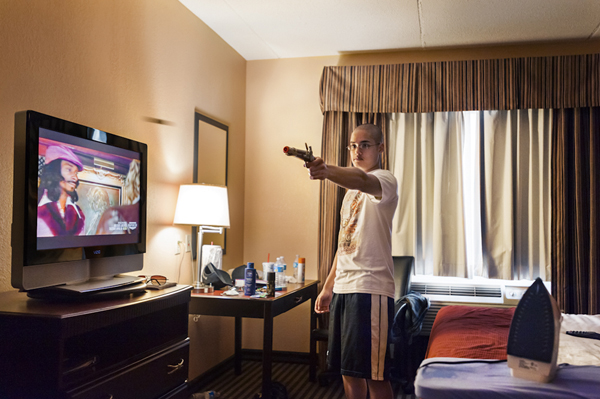 Cadet First Lieutenant William Wiedenbaum shoots a toy gun at his drill teammates in Louisville, KY, on March 30, 2012, a day before the team competed in the Army JROTC National Championships. © Adrian Fussell
Posted by Richard Ansett at 00:44 No comments: 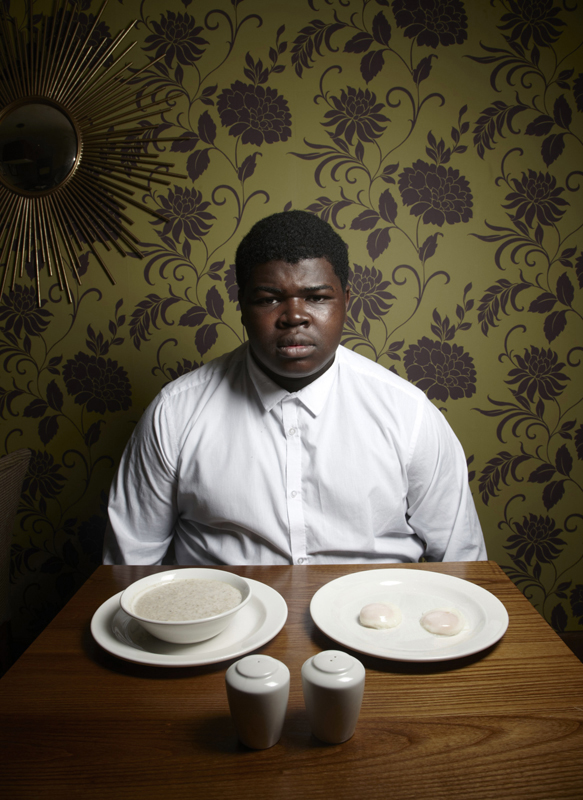 A Barometer of Healing

The themes of the exhibition ‘I LOVE YOU’ at Tenderpixel in May 2012 could easily be misunderstood. It was not a show about love at all. The actual premise was that regardless of any immediate motives we are drawn again and again back to themes that satiate our emotional need.

We are accustomed to photography’s function in our everyday media to clearly narrate the world on our behalf that can make us a little complacent in our expectations of fine art practice. As Troika Editions stated at the private view “You are expecting us to work a little harder.”

Without reading the exhibition statement we maybe forgiven for mistaking the theme and some found ways quite successfully to imbue the works with un-intentioned meaning. http://art-corpus.blogspot.co.uk/2012/05/review-of-i-love-you-at-tenderpixel.html
In my response to Miranda Gavin's comments on the Hotshoe Blog; there are no certainties, this is a discussion, a debate.

Grace Brown, 19 founder of Project Unbreakable is one of the artists from ‘I  LOVE YOU’ and author of the title image. Brown says “I (sic) use photography to help heal those who were sexually abused by asking them to write a quote from their attacker on a poster…to spread light, awareness, and healing for those who have been affected. ”

In the decision to share their identity in close juxtaposition to their protagonists’ words, Brown’s subjects use the boards as an instrument of control; preserving their anonymity entirely or daring to ‘come out’. In the broader discussion of the timeline of recovery, the boards act as a barometer of healing. 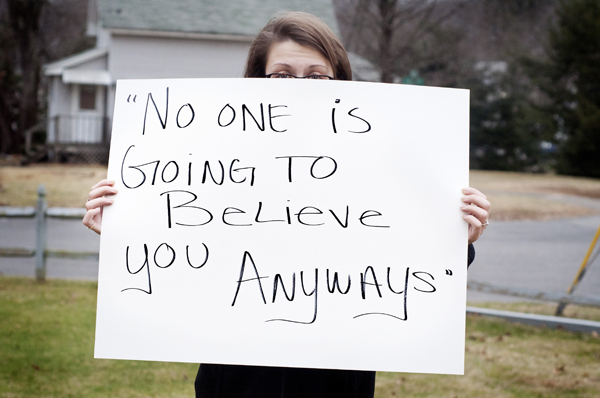 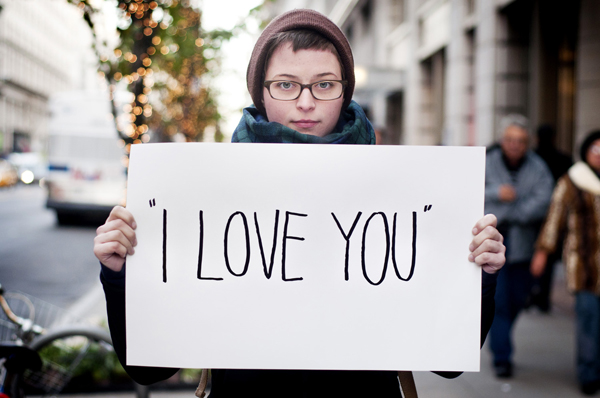 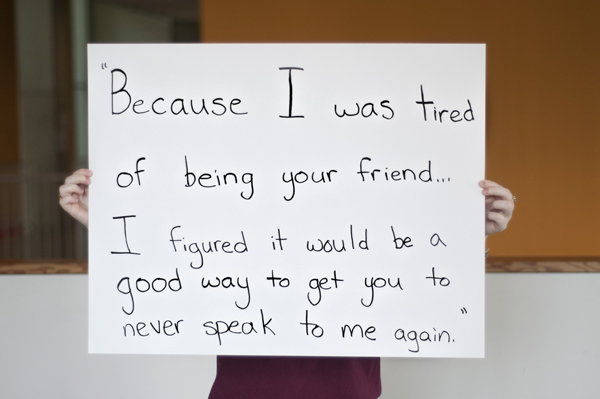 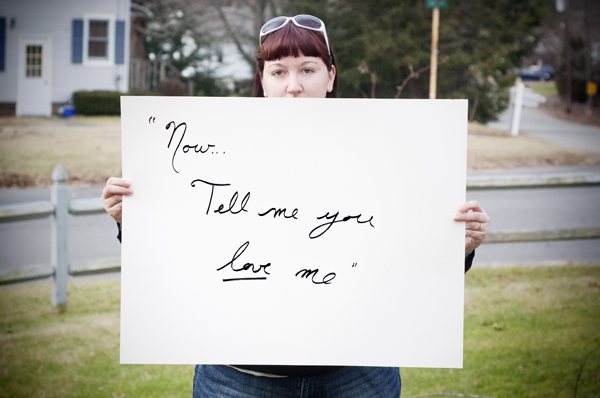