When my friends had their first baby 9 years ago I gave them a large print of two rabbits on a dry stone wall in a faux rococo frame. They have had a second child since and she now lies in the cot facing the giant bunnies just as her sibling had done. Her brother has begun a new journey away from the rabbits, in his own room, where he now thinks he makes choices about what is displayed.

Unquestionably this will have been one of their very first visual memories and my interest then and now is its effect on them as they grow up but equally how it might be imbued with their emotional development.

We have an inextricable link to the tangible; whilst technology races ahead we are evolving much slower and it seems that to hold something in our hands has a greater significance, especially and ironically for a new generation brought up only knowing a dominant digital world.

I bought Sage Charles, a 21 year old libertine and great writer, a '60's Olivetti typewriter. We were fascinated by the ability to express our feelings onto paper through the visualisation of the weight applied to the keys. It is only now that the almost spiritual subtleties of typewriter expression and handwriting can be celebrated relative to the glorious but (for the purposes of this chain of thought) cerebral nature of the computer world.

When I first attempted to make contact with my biological mother, I was introduced to an original file from when I was handed to the adoption agency as a baby. As the adult me, I was initially unmoved as I sat in the counselling room next to a half dead pot plant and a box of tissues. It was only at the point where I was introduced to a section written in my mother's hand that I was overwhelmed. In that moment, I was in the presence of her physical act 40 years previously, it was not the content or narrative meaning that resonated but her presence there in that moment.

Nostalgia is not purely the simplistic notion of harping back to a better time; it is to imbue an object, person or even one's entire present with emotional memory. If this is accepted then we cannot assume a universality of response or trust our own consciousness. I have experienced an audience reaction to a single piece of work ranging from weeping, a form of religious ecstasy to utter indifference. Perhaps the bunnies in my friends' house have stopped 'being' bunnies and have become purely the colors and shapes of a sort of emotional catalyst. Therefore I accept my fate and live with confusion and ambivalence; can we all agree on that? "To know that you do not know is the best." ~ Lao Tsu

Posted by Richard Ansett at 09:27 No comments:

In image making it is not easy to be fully aware of the influences that inspire us to create. We are bombarded with imagery and the more we learn, the broader our frame of reference becomes. Ironically this narrows our ability to create original works as we discover how much has gone before but influence and inspiration are inevitable and essential parts of the creative process. Acknowledging this recognises that we cannot work in isolation. If we cut ourselves off from the complex world, we see our work only relative to the lowest common denominators of aesthetics around us. I feel it is a moral duty to investigate my influences and declare them. It seems photography as an art form is the most coy about this process. I am not sure whether this is a sort of corruption or ignorance maybe both or perhaps there is a little fear of being exposed.

We should not be afraid to discuss and explore our influences.

A few weeks ago, I came across a single image called 'Otto Jumping' which did well in a juried competition. It is an immediately striking image but I had this overwhelming feeling that I had seen it somewhere before. More recently, I was at the 'David Bowie Is' exhibition at the V&A, which incidentally, really impressed with its dissection of Bowie's creative process, and at this show I came across a great print of Terry O'Neal's shoot for Diamond Dogs.

This is just for illustration purposes only and I am certainly not making any assumption that the photographer was any more conscious of his influences at the moment of choosing this image than I was in viewing it but the reason why this contemporary image has value is that it is imbued with the genius of the O'Neal Bowie collaboration.

A very wise person once said to me that if you take an image and immediately like it, then it already exists in some form elsewhere and all we are doing is mimicking. Original work is possible but we will always bring our influences into the process of creation, so it is important to attempt to be conscious of what they are.

My issue isn't with the artist, I am not even critical here of any deliberate acts of plagiarism; we are arbiters of our own fate and if our need for affirmation is our primary goal that is entirely our own concern. The jurys, bloggers, curators and magazine editors however are the filters of what we see, they are the gate keepers of the credibility and respect of fine art photography and its legacy.

We all feel trapped by the debate on where photography is now; the 'is it dead' debate continues in those same blogs and magazines that have to endlessly fill their pages with something that 'seems' new. So we are still preoccupied with the post modern persuit of re-invention instead perhaps re-igniting the quest for the new contemporary image, stalled since the exciting days of Wolfgang Tillmans.


Perhaps when we start to pull back the curtain, we are afraid of our own little old weak man behind it pulling levers but we have a responsibility to challenge ourselves and the practices of other artists and decision makers, not aggressively but as a new landscape of discourse helping to explore the motivations that lead us to create. Perhaps then this pursuit of authenticity will lead to the development of a new way of seeing.

Here is one of my images from the series of 4 'Untitled', 2013 from 'PORTRAITS' showing at Tenderpixel, London and 'Women of Rissani, Morroco, 1971 - Irving Penn.

Posted by Richard Ansett at 07:59 No comments:

'Autisation' of the Contemporary World

“Daydreams” is the third in the series of international projects, “Aut” is organized by curatorial group “Doroshenko Gryshchenko Clinic” and tries to comprehend the idea and process of “autisation” of the contemporary world and human. The previous two projects took place in Kiev in 2010 and 2011 with participation of curators and artists from Ukraine, USA and Canada. This year’s project will be curated by cult Russian critic Viktor Toporov and the co-founder of Doroshenko Gryshchenko Clinic, Oksana Gryshchenko. The exhibition’s theme - “Daydreams” - is dedicated to visionary art.


Viktor Toporov: “Instead of depicting objective (external) reality under the angle of this or that creative method, visionary art presumes depicting reality as subjective (internal), which is only indirectly connected to the objective reality: “unprecedented collection of past experiences” (as academician Pavlov defined dreams - daydreams in our case).


Visionary art has grown historically from religious and mystical practices (e.g. Biblical prophets) and was spread to clerical paintings of late Middle Ages, first of all, in the pictures of the Judgment Day. The key figure of the visionary direction in art was great English poet and artist William Blake, who has devised (drawing on Swedenborg and Bohme) his own theogony and cosmology, having described it in the collection of poems under a common title “Illuminated Books” and illustrated them with wonderful relief etchings.


Starting from the works of Blake (around 200 years ago and later), visionary art was secularized and diversified: it became the world of individual Doors of Perception (according to Aldous Huxley), the world of individual Altered States of Consciousness from Hoffman, Gogol and Edgar Poe to Daniil Andreev, Carlos Castaneda and Garcia Marquez. Similar processes took place in painting - from figurative romantic visionary art of Taras Shevchenko (less-known works will be presented within our exhibition) to suprematism of Malevich, not mentioning significant artistic endeavors of our days (once again covering a wide spectrum - from Lucian Freud and Maxim Kantor - another participant of our exhibition - to some Hirst).”


The concept of the project is connected with two issues: 1) separating true visionary art from its commercial imitation; in this regard, we fully rely on our curators); 2) realization of visionary art as a cognitive phenomenon connected - via Savant syndrome or directly - with autism.

AUT3 showing at the National Museum of Taras Shevchenko, Kyiv UKR - April 5th till May 18th 2013. 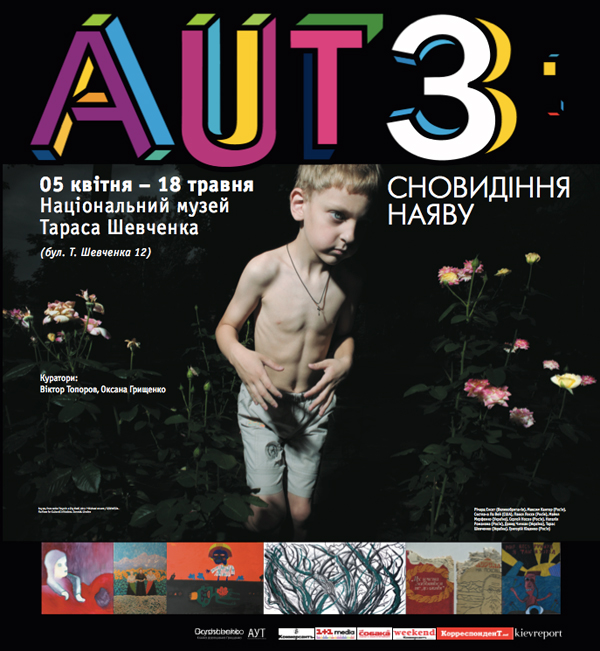 Posted by Richard Ansett at 13:22 No comments:

One Nail in the Coffin

I remember the tories under Thatcher as the architects of an insidious moral agenda that alienated and polarised. I personally felt oppressed and attacked by Section 28, it was state sponsored queer bashing that criminalised my humanity and passively threatened all of society. It suppressed all with the morally narrow and self righteous views of a new petit bourgeoise, subjugating any of us who didn't fit in under this democratic tyranny.

The legacy of Thatcherite individualism still resonates now and obstructs any genuine attempts at multi-culturalism.

Thatcher wasn't coy about her agenda, "Economics are the method; the object is to change the heart and soul." Moral taxation and reward policies; tax breaks for married couples whilst oppressing and marginalising non-hetrosexual relationships and the destruction of the a whole country's cultural heritage, especially in the North. Millions were paid to be unemployed as this new utopia was to be formed.

Out of this demagogy, came a new generation of artists inspired by an identifiable figure of derision and hate. But Thatcherism cannot take credit for this; it would be like the Nazi's taking credit for inspiring Primo Levi. I am part of this generation and the iconoclasm and the undercurrent of critique in my work may have been formed at this time.

Politics and politicians learned from Thatcher's downfall, they realised quickly not to make themselves a target and ever since, politics has become grey and intangible. Politicians are careful to avoid issues that can be rallied against, instead there is a perfidious drip of policy shifts and we feel impotent in its wake. BUT humanity always finds a way to escape through the cracks; great art for me is the cracks. it is the intangible balance of composition in the abstract, the unwritten words of a great novel and the under current of otherness beyond the narrative.


Posted by Richard Ansett at 03:26 No comments: