Transylvania easily dispels the myth of the Victorian Gothic pot boiler but whilst large stretches have been stripped of any charm by the post revolutionary zeal to develop into a modern state, there are isolated pockets, lost in time, where peasants eke out a subsistence living, romantically portrayed as 'low carbon' and ‘moneyless’ rather than poor, by the tourist brochures and travel writers.
Romania has had its fair share of pogrom both under the Nazis and then the Russians, (in Transylvania 8000 villages were completely destroyed by the Ceaucescu regime), they are considered by the outside world and themselves to be the ‘poor man of Europe.’ It is hard to reconstruct a national identity when it seems no-one cares who you are or what you think.
Around the motorway ‘non stops’ there is uneducated superstition.  I refused a gypsy begging by the roadside; a curse feels palpable and personal here just 3 hours away from the secular security of London. They mumble something Hungarian under their breath at you whilst maintaining eye contact and smiling.
As the sun went down, we raced along dirt tracks, dogs chasing and barking at the windows, towards a small village in the heart of Transylvania to dine with a Count, Count Kalnoky and his wife Anna. The Count had a priviedged upbringing in Munich and avoided the Ceauescu regime and was distant and socially awkward but Anna had lived through these terrible times and whilst much more socially engaging, still hid her emotions behind an expressionless gaze. At one point, she stood in the corner, facing into the wall for too long to illustrate her harsh treatment as a child. The butler shared with me "the local peasants think she is a witch".

I threw pálinka into the fire place, the alcohol creating huge flames adding to the melodrama but I drank too much and mixed with my medication, I later lay awake in my room alone, avoiding the whisper of spirits in my ears until dawn appeared through my shutters.
When I returned to London a large black fly flew out of my ear.


Posted by Richard Ansett at 12:47 No comments:

Here is the image used for my 2012 Christmas card in collaboration with Tenderpixel Gallery as a limited edition.

I don't remember exactly when I knew Father Christmas didn't exist; there are many moments of childhood that resonate emotionally but aren't tangible. I am lucky that occasions, sights and smells that remind me of childhood bring back only comfortable, happy memories.

Interestingly, (to me) I have no memory of ever being told I was adopted; it is as if I always knew and never knew any different. Clever.

I didn't have a sibling that shattered the magic of Santa Claus out of playful spite, I never caught my parents sneaking presents under the tree or replacing a tooth with some money under my pillow; I just stopped believing.

Posted by Richard Ansett at 08:52 No comments:

The Art of Corruption

On the same day that Saatchi Gallery was offering a free catalogue of 'Gaiety is the Most Outstanding Feature of the Soviet Union', I was booked in for an early visit to 56 Dean Street 'your friendly convenient central London sexual health and HIV clinic.'

Arriving soon afterwards at the gallery (along with a large primary school party of mainly Muslim girls), I was confronted with a huge print of a diseased and blistered penis as part of the exhibition of Boris Mikhailov's 'Case History' series. I assure you my penis is neither huge nor diseased (touch wood).

Saatchi Gallery has not been shy in their presentation of this incredible series and have given it an entire floor. I confess this is, in my opinion, the seminal collection of images from the 20th Century, seminal being the operative word.

I had the incredible privilege of working with Mikhailov in Ukraine in 2011 and he mentored me during the development of Hospital Gardens, Boys in a City Park and Mother & Child; I was able to form an opinion about the man first hand.

My overriding impression of him is that he is most like an elderly bacchanal elf; mischievous in the extreme. During a presentation of his new works (including rock formations in the shapes of female genitalia), our director and curator fell off her chair and his immediate response was to burst with laughter; at lunch he directed a young and beautiful intern to pose suggestively with a bottle, putting it in and out of her mouth. I love him obviously. He said my work was 'the skeleton from which all the other meat hangs'...a very creepy critique indeed but I'll take it, thank you.

Case History is a benchmark for any artist exploring concepts of truth and reality in their works, there is no work I know that comes closer to a sense of complete corruption both in the process of creation and presentation of the finished works. In the very act of corruption it is corruption exposed. Paradoxically, it is the most honest, 'real' work there is; the artist is present, literally within the works and it is free from the aesthetic ambition in the moment that challenges the authenticity of all other works.

Here's an image of Guy from the series 'The Big Society', throwing up in a bucket next to some fruit.

Posted by Richard Ansett at 03:28 No comments:

See link to a short 13 minute film 'Det perfekte menneske' made in 1967 by Jorgan Leth. The cold objectification of the human only seeks to emphasise the humanity of the subject. A metaphor about the strength of the human spirit to defeat the boundaries imposed or self-imposed. Its un-nerving to watch oneself from behind the glass.

If you have never seen it, take a look and if you know it, its worth seeing again.

Here is a new series of a model shaving his head, which has been in the planning stage for a long time. A larger version is available here

Posted by Richard Ansett at 10:38 No comments:

Giotto in a Potato Chip

During the restoration work of Giotto di Bondone's fresco at the Bascilica of St Francis of Asisi, a face has been discovered in the clouds after being unnoticed for 700 years. There is some discussion about whether it is of the artist himself or even of Dante (neither of whom seem to have been very pretty from the existing portraits). Educated theories however centre around a mischievous and perhaps spiteful inclusion of this devilish likeness by the artist. Another possibility is that this depicts a belief at the time that demons hid in the clouds to block souls ascent to heaven, which I like. 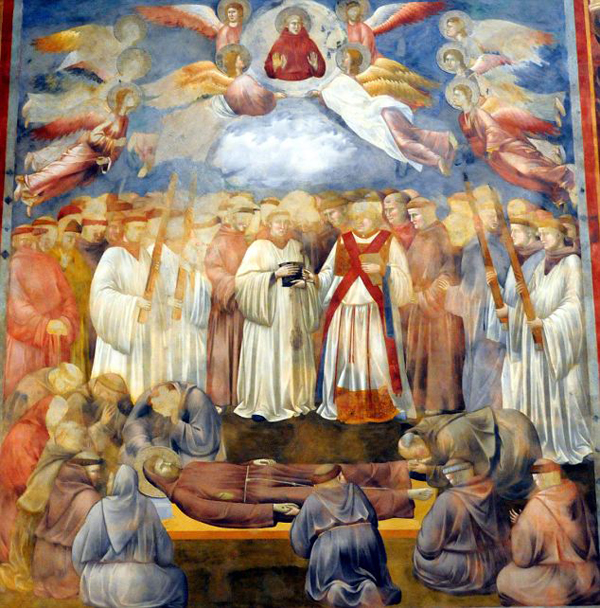 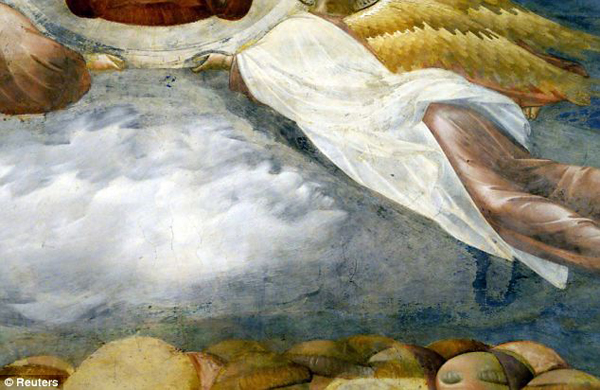 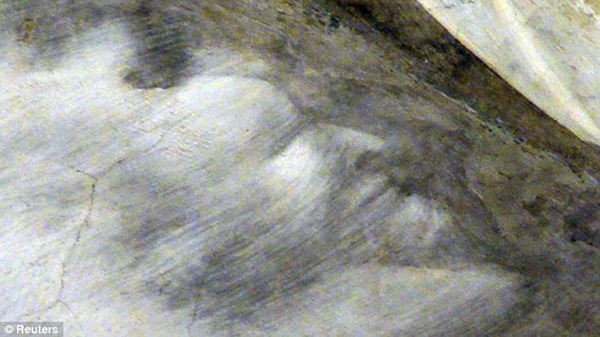 Giotto may have interpreted this fascination for the discovery of images in the everyday world, however the original depiction of the mortality of St Francis has now been a little overshadowed by the scramble to get a glimpse of this 14th century equivalent of 'Jesus in some beer foam.'

We are reconnected to this medievil schizophrenia in contemporary life through funny shaped carrots and potato chips. Not much has changed, although A-list celebrity now shares the iconic spotlight with Jesus and the Virgin; science now defines it as Pareidolia, (the imagined perception of a pattern or meaning where it does not actually exist. Dictionary.com) citing Elvis in a potato crisp as evidence. It's an example of our need to imbue the banality of the everyday with meaning where there is often none, in the hope that there is more and as an audience of art the responsibility for meaning will often fall on us.

There is a collective participation in the acceptance of an emotional resonance that contemporary photographic artworks demand from us. Many works present a nothingness to receive our projections of meaning in the collection of pixels that form representations of reality. I play with this idea in Lion Hunting in Essex, where the undergrowth of a small Essex village is a potential hiding place for an escaped, large wild animal. I am thinking more famously of the most expensive photograph in the world, Andreas Gursky's Rhein II auctioned for 4.3 million dollars in 2011. It dares to elevate the everyday to the extraordinary and encourages us to see the world in a new way.

I have included by own little Gursky, the first photograph I remember taking when I was 8 years old in 1974. 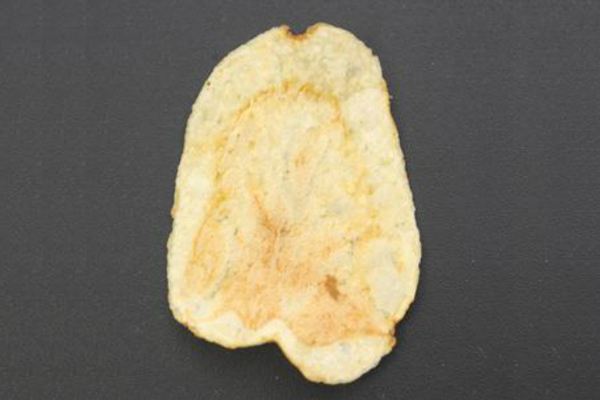 Here are some examples supplied by the Huffington Post.

Posted by Richard Ansett at 01:04 No comments: 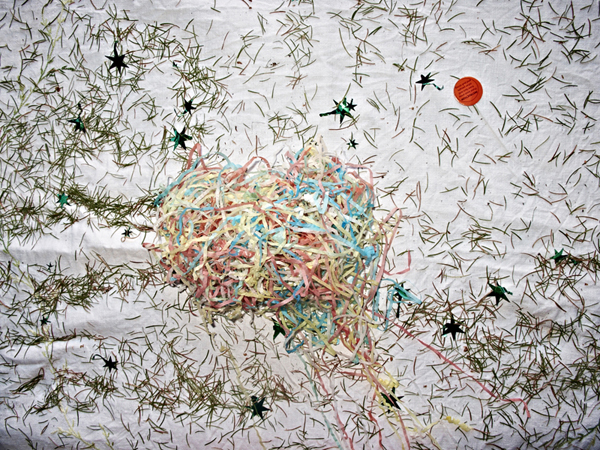